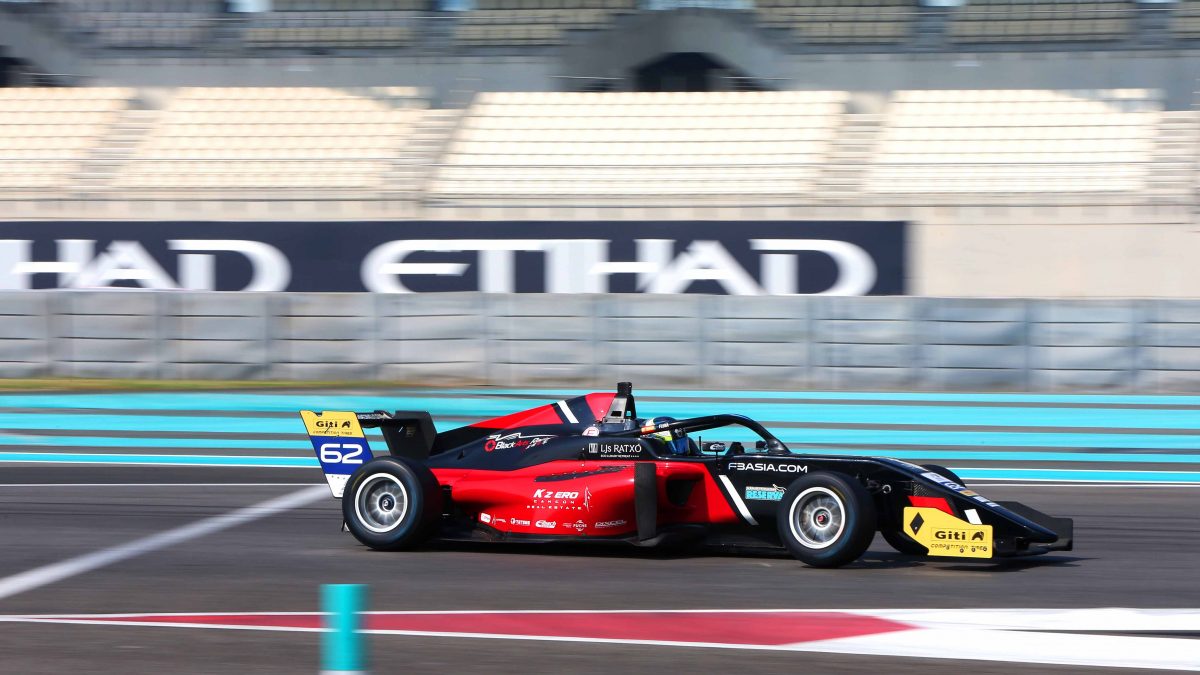 High-octane weekend for the Balearic on the double header at Yas Marina, where he was close to get his first podium on the category after finishing fourth on the penultimate race of the meeting. Showing his enormous progression on his debut at the Championship, the young 16-year-old Majorcan finished his performance at Abu Dhabi with a splendid P9, having had a tremendous fight for 8th.

The double header at Yas Marina, with an intense program with the usual structure of two qualifying sessions and three races per meeting, along with their practice sessions, gave good results for the BlackArts Racing team driver Lorenzo Fluxá.

On these so complete days, Lorenzo and his team suffered some mechanical trouble that made them unable to finish in one of the races and finish last on the other one after having to get to the box after a collision with another participant. Both circumstances didn’t demoralise our protagonist, and it was precisely in one of those races when he had the chance of starting fourth on the grid, after setting one of the fastest laps of the event. An opportunity the Majorcan did not waste, achieving an excellent 4th position.

The first meeting took place on Thursday and Friday. Lorenzo started in Abu Dhabi with a good 11th position on the first race. On that race, the driver from LJs Ratxó Eco Luxury Retreat held a long fight with Kush Maini (Mumbai Falcons India Racing) and Casper Stevenson (Evans GP), who could pass to finish 11th, close to the drivers in front, both from Hitech Grand Prix, Ayumu Iwasa and Reece Ushijima.

A problem with his car clutch ruined the start of the second race. Doomed to race in last, the team opted to box him to put on some used tyres, with which the driver finished the race, crossing the line on 21st.

The first three-race block ended with another scar for Fluxí. The Majorcan started from 15th and on the first lap he saw how a touch with another car broke his front wing, having to pit to change it. On that moment, it was necessary to deploy the Safety Car when three cars were stuck on the middle of the track. Having the race resumed, Lorenzo could climb up to 13th. It was 16 minutes of thrilling racing for the driver from Black Arts Racing, as he went from 19th to 13th. On his way, he passed Matthias Luethen, Rafael Villagomez, Amna Alqubaisi and Alexandre Bardinon.

The second meeting, with races on Saturday and Sunday, didn’t start well. A failure prevented the Majorcan to take part on the first Qualifying. So Lorenzo started last and another touch with a driver made him pit, losing several laps. Given the circumstances, back on track he pushed hard trying to get the fastest lap of the race. He did it on the 8th lap, setting a time that would have put him on provisional pole for the next race, although he later had to retire. Various drivers set a better lap after, but with the time he set he managed to hold on to 4th position.

Surrounded by older, more experienced drivers, usual contenders in F2 and F3, Fluxi was not intimidated and not even the deployment of two Safety Cars prevented him on this race, his most decisive one, to hold on to P4. It was Sunday already, the last day of the busy weekend at Abu Dhabi. Without making any mistakes, not on the start or on any of the restarts, Lorenzo raced side by side with the fastest drivers of the Championship, being passed by Dino Beganovic, behind whom he spent almost the entire race, holding his teammate Cem Bolukbasi behind. After the tenth position at Dubai, this fourth position leaves a very good impression, although maybe without the intervention of the Safety Cars, which shortened the race, he even could have fought for the podium against the Swede from the Ferrari Driver Academy.

The last of the races of the long weekend at Yas Marina finished with a 9th position. Starting from 12th on the grid, he climbed up to 9th on the first lap. Right at that moment the Safety Car was deployed due to an incident between Cem Bolukbasi and Dino Beganovic. The race resumed on the fourth lap and then Lorenzo was right at the back of Kush Maini and far from 10th Reece Ushijima. On the ninth lap, he tried to pass Maini in various moment. From that moment Fluxi never stopped trying until the chequered flag, where he finished right on his gearbox. With a P4 and a P9, Lorenzo climbs up to 12th overall, the 6th best rookie.

Lorenzo Fluxá: “I’m very happy to have achieved this P4. I knew I could fight to be this high and the moment has come. It’s been a non-stop weekend, with lots of fun. We kept correcting any mistake we could do, without stopping once. The first meeting wasn’t all that positive, but the second, specially on Sunday, has been my best moment in F3 Asia. Not being able to take part in the first Qualifying because of the clutch made us rethink that race. We opted to set the best fastest lap we could to be on the front of the grid. We put new tyres and it worked. On the last race I learned a lot attacking Kush Maini, a well-experienced driver who knows to block every space. With the Yas Marina setup we had it was hard to pass on the long straight”.

After this double-header at Abu Dhabi, the FIA F3 Asian Championship moves back to Dubai, which Autodrome will host the fourth round of the Championship this weekend, February 12-14. As in last year, Lorenzo is sponsored by LJs Ratxó Eco Luxury Retreat, Reserva Park-Serra de Tramuntana and K-Zero Cancún Real Estate to carry on with the program.