Lorenzo Fluxá, among the favorites for the victory on the Spanish F4 at Paul Ricard 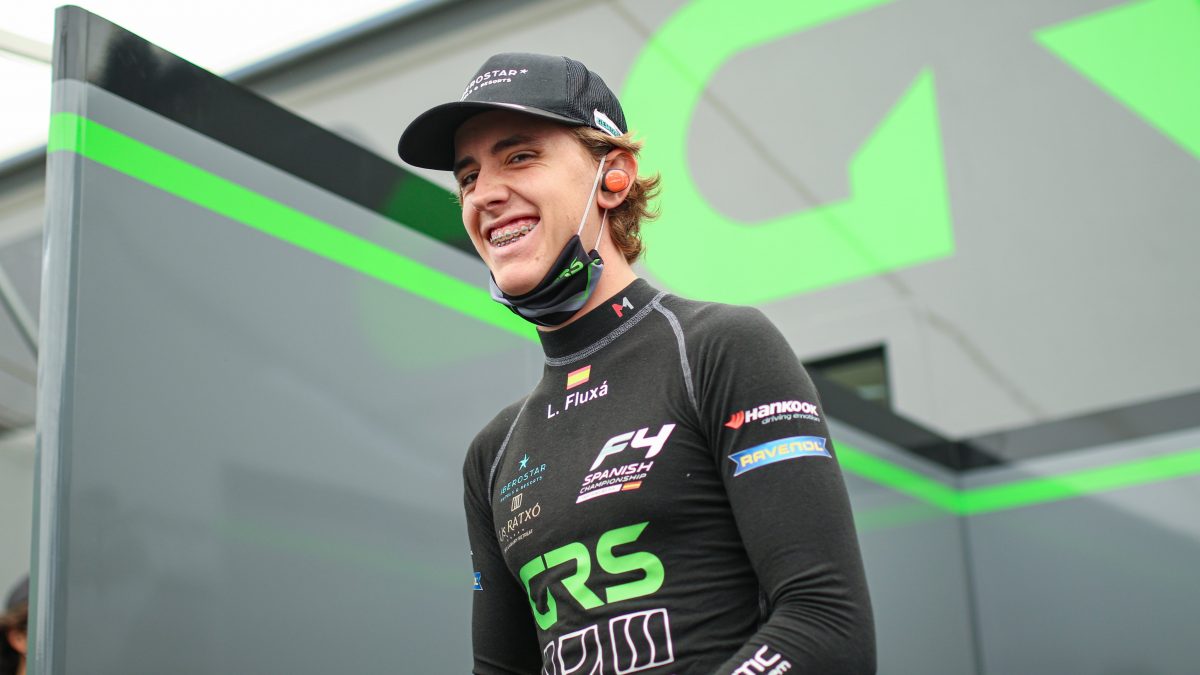 THE SECOND EVENT OF THE SEASON HAD LORENZO FLUXÁ AS ONE OF THE REFERENCE DRIVERS OF THE CHAMPIONSHIP ONCE AGAIN. THE YOUNG MAJORCAN STEPPED AGAIN ON THE PODIUM, FINISHING 3rd ON ONE OF THE RACES AFTER A BRILLIANT SHOWCASE FULL OF EMOTION. DESPITE THIS, A 10-SECOND PENALTY PREVENTED HIM FROM TAKING POINTS ON THAT RACE. 6TH AND 7TH ON THE OTHER TWO RACES, RESULTS DO NOT HONOR THE DRIVING AND QUICKNESS THE GRS TEAM DRIVER SHOWCASED.

Frenetic activity on the second round of the Spanish F4 Championship on the asphalt of the mythical Circuit de Paul Ricard. It was on this track where Lorenzo Fluxá relived the happiness of stepping again on the podium, although a later penalty demoted him to P15. The penalty has been appealed, being it provisional on that race. It was on the second of the three races on the French track that Lorenzo finished 3rd, position he achieved on track, climbing up to the podium on that race. The F4 Spain round at Le Castellet was held on a larger meeting organised by the Spanish brand GT Sport.

Lorenzo Fluxá got to Paul Ricard as one of the top drivers of the Championship after achieving a podium in one of the races at the inaugural round at Navarra. Lorenzo’s Tatuus F4 equipped with an Abarth 1.4 Turbo engine showcases two new sponsors who joined the program of the bearing driver of the Majorcan hotel LJs Ratxó Eco Luxury Retreat. They are Reserva Park-Serra de Tramuntana and K-Zero Cancún Real Estate, two brand-new brands who wanted to join the project of the young 15-year-old driver on his path to F1.

Lorenzo started his first race of the weekend, which took place on Saturday midday, in 8th place. The Majorcan won two positions at the start, being 6th on the first lap, right when the Safety Car was deployed due to an accident. He was placed 6th after passing Jasin Ferati (Jenzer Motorsport) before the Safety Car period, and passed Oliver Goethe (MP Motorsport) right at the end of the straight after the restart, putting himself in 5th when there were ten minutes left to race.

Lorenzo had Goethe on his back for various laps, the Dutch stalking the Majorcan’s car, who could pass him with five minutes to go. On the final stage of the race, Swiss Jasin Ferati put himself on the back of Lorenzo’s car, passing him almost at the end. This way, the GRS Team driver reached the chequered flag on 7th. Just like on the first race of the season in Navarra, the tyre choice for this race was crucial on not being able to hold his rivals’ attacks.

Mid-Sunday Lorenzo was the main protagonist of the second race. A superb comeback brought him from his starting position of 8th to an excellent 3rd, getting his second podium on the Spanish F4 Championship. Sadly, he was later penalised and demoted to the 15th place. A thrilling race with a cliffhanger ending. On the start, Lorenzo put himself on 5th, closely followed by Francesco Simonazzi (Jenzer Motorsport) and threatening 4th placed Kas Haverkort (MP Motorsport), who he passed on the second lap.

The oldest of the Fluxá saga (two of his three brothers race on karting) put then his target on 3rd placed Oliver Goethe, who had a brave duel on the first race. Lorenzo attacked the Danish while he was having Haverkort right on his tail, until he ran off the track and he was forced to retire. Next, an incident between Suleiman Zanfari (Global Racing Service) and Javier Sagrera (MOL Racing) caused the Safety Car to deploy on lap 4, nine minutes away from the end of the race.

On the restart, Fluxá held on to 4th. At these moment Mari Boya (MP Motorsport) and Goethe were fighting for P2, what allowed Lorenzo to attack them, forcing an error on the Danish that let Lorenzo pick up P3 behind Boya. The Majorcan put himself on the slipstream of the Catalan on the penultimate lap, but on the last one, a failure on the gearbox prevented him from fighting until the end. This handicap made it difficult to stop oncoming drivers Simonazzi, Goethe, Ferati and Dufek, but he bravely defended his 3rd position until the chequered flag.

The third race of the weekend, raced mid-Sunday, had Fluxá starting P4. A grid position achieved after a great Qualifying on the first hour of the morning on the second Qualifying practise.

The start saw Lorenzo holding his 4th position, but soon after was passed by Filip Ugran (Jenzer Motorsport). On the second lap, Lorenzo could hold Goethe and Haverkort off, although they passed him later on. Seizing a fresh set of tyres he kept for this race, Lorenzo pushed on and passed Haverkort, recovering P5 in a stunning move.

The fight among the riders in front helped Lorenzo come closer to the group who was fighting for podium positions, placing himself 4th after a mistake by Dufek while fighting with Ugran and Mari Boya on the last minutes. In a crazy penultimate lap, the entire bunch of driver fighting for the lead was passed by Haverkort and almost Dufek at the line. That way, Lorenzo finished the French weekend in 6th.

Lorenzo Fluxá: “I’m very satisfied with my racing on the three races in Paul Ricard. I think I drove on a very high level, fighting for positions on top in each of them. It’s clear that there’s always something you can improve and that I still have to learn to get the most out of the car. Already in Navarra we were close to victory and here we made a step further, specially in some of the races, like when I crossed the line in 3rd and got to the podium. There have been hardly-fought races by every driver in front, so this penalty has been like a jug of cold water to us. To win you need three things: to have a good car, to be on the top of your driving, and to have a bit of luck. I hope I can get all of this in Jerez”.