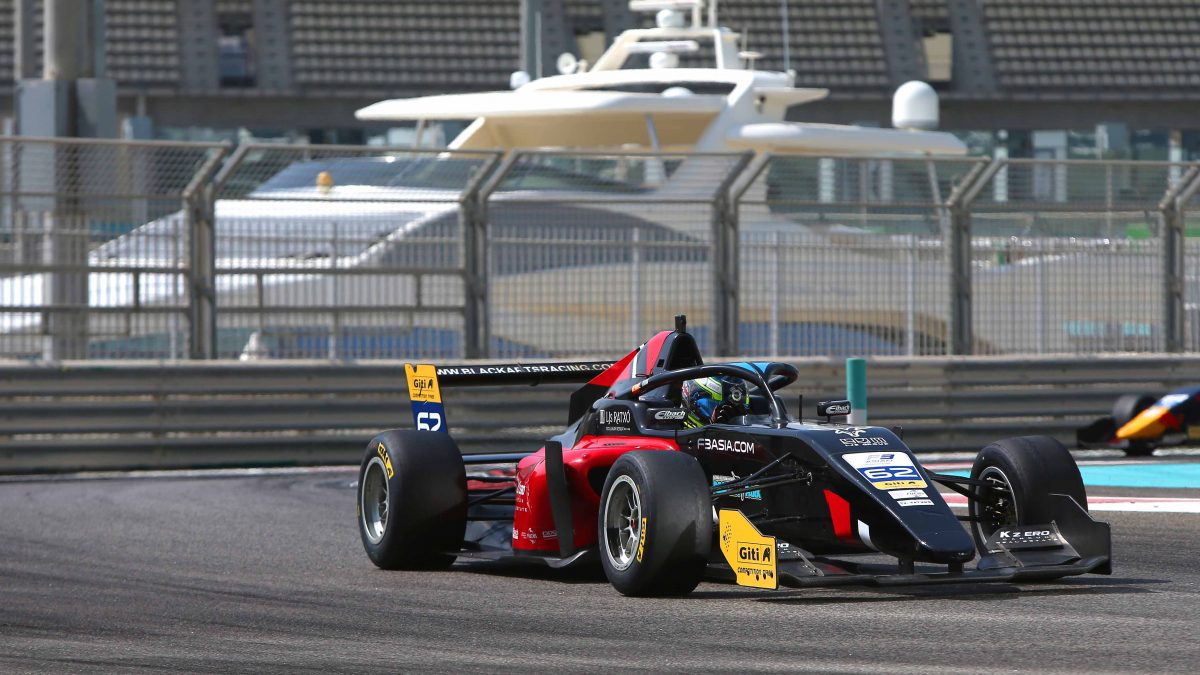 Despite how complicated the final round of the FIA F3 Asia was, Lorenzo Fluxá could finish his season on the Championship with a top 10 finish. It was on the second race at Yas Marina (Abu Dhabi), when he finished 8th. A tough weekend for the Majorcan who couldn’t finish the first race after suffering a crash on the first lap and finished 13th on the last race of the season. At the end, the driver from LJs Ratxó Eco Luxury Retreat finished 14th overall and 6th on rookies’ standings.

The Championship’s second visit to Yas Marina (Abu Dhabi) closed the fourth season of FIA F3 Asia. It was an intense four-weekends event full of action with no less than five meetings with three races in each of them. As an opener for the Asia Le Mans Series starting from the previous round, the end of the Championship took place on the spectacular track of Yas Marina.

Despite being able to score points on one of the races after finishing 8th, the overall balance of the last round of the Championship wasn’t totally positive for Lorenzo Fluxá. An incident with another driver on the first race ruined his chances to have a good result at the start of the weekend. Forced to change his strategy, Lorenzo improved with his 11th fastest race lap his starting position for the second race, what he converted into P8 on the race. On the last one, starting from 14th on the grid, Lorenzo just could gain one position to finish 13th at the chequered flag.

The first race took place at night under the lights of Yas Marina. Lorenzo started 16th and after the first lap he had to stop for a front wing change, damaged on a crash with another participant. On his comeback to the track, a lap down, the driver from BlackArts Racing had the track for himself, trying to set the fastest time possible to get a good starting position for the second race and forget the bitter start. His best lap was the fastest among the rookie drivers, being later bettered by two racers, putting Fluxi on 11th overall, 3rd on rookies’.

On the second race, Lorenzo started therefore on P11. On the first lap, he was passed by Ayumu Iwasa (Hitech Grand Prix). The incident between Pierre-Louis Chovet (Pinnacle Motorsport) and Roman Stanek (Hitech Grand Prix) made race direction to deploy the Safety Car. The race resumed on its fourth lap. It was on the following lap when Fluxi climbed up to 11th after a mistake by Iwasa. On that moment, Reece Ushijima’s (Hitech Grand Prix) P10 was within reach, but a new Safety Car was deployed. An incident between Khaled Al Qubaisi (Abu Dhabi Racing by Prema) and Alex Connor (Evans GP) left their cars stranded on the middle of the track. With the SC on the circuit, the race wasn’t resumed until lap 8. A drive-through penalty for Amna Al Quabaisi (Abu Dhabi Racing by Prema) made Lorenzo rise up to 10th, the position in which he finished the race. After the race, penalties where applied, and the Majorcan, whose arrived at parc fermé with marks from another driver’s car, got two more places, finishing 8th.

The last F3 Asia race started with Lorenzo on P14. He had Roberto Faria (Motorscape) in front and teammate Rafael Villagómez behind. On the first lap, where another driver touched him, fortunately without major damage, he held position. It was on the second lap when it was necessary to deploy the Safety Car after Alessio Deledda (Pinnacle Motorsport) got off the track. The race resumed on the fourth lap, when Faria ran off the track and let Lorenzo put himself in P13. Laps went by and the young 16-year-old finished on that position, right behind fellow Spaniard David Vidales (Abu Dhabi Racing by Prema).

Lorenzo Fluxá: “It has been a difficult weekend. In a Championship on this level, to get a good result you need everything lined up perfectly and do it all perfectly. So, the 8th position achieved during the second race is by all means something you have to judge fairly. And I’m very happy with it. A Championship with drivers with such experience lets you learn a lot and, in that case, we still see Qualifying as our unfinished business compared to our rivals. They make the most out of their cars on Qualifying and I still can’t. Racing in F3 Asia has been an incredible experience, I learned a lot alongside very talented drivers and that was the target we set when participating here”.