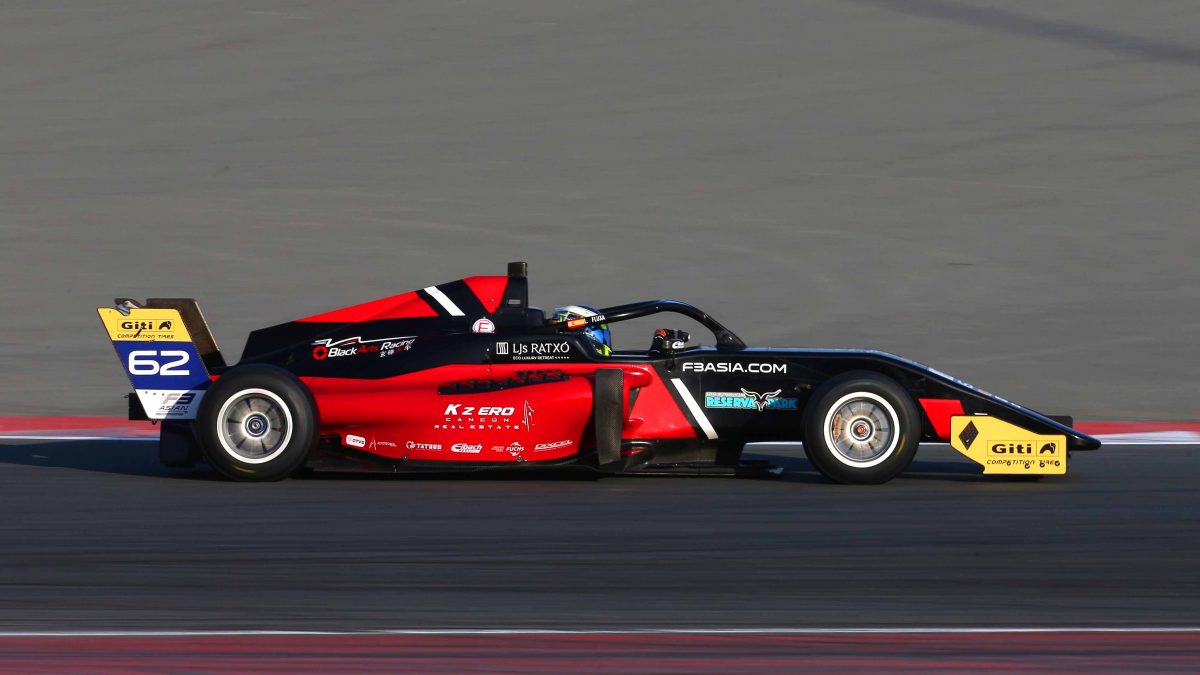 The 7th position achieved on the second race of the FIA F3 Asian Championship celebrated at the Dubai Autodrome was Lorenzo Fluxá’s best result this weekend. The driver sponsored by LJs Ratxó Eco Luxury Retreat continues his positive progression in this Championship. At the wheel of a car from the BlackArts Racing team, the Majorcan was 13th on the first race and 14th on the third. With just one round left at Yas Marina (Abu Dhabi), the young 16-year-old is 13th overall, 6th on the rookies’ standings.

The return of the FIA F3 Asia to the Dubai Autodrome, 15 days after its season opener there, was raced in a different scenario. This time, the category selected the longest layout of the track, the GP configuration. This change was due to F3 Asia being the opener category of the Asian Le Mans Series, that started this weekend at Dubai.

The penultimate event of the F3 Asia season was complicated for Lorenzo Fluxá. Out of the three races, a P7 on the second race was the best of them all. Starting from the second half of the grid ballasted his options and the comeback of the second race was the most positive thing. The appearance of various Safety Cars on each of the rounds, being the last race even stopped by a red flag, broke the pace of the Majorcan in a track were passing was harder than expected.

For the first race, Lorenzo started from 14th on the grid. On the first round, he let a position go by being passed by his teammate, Mexican Rafael Villagómez. The first part of the race wasn’t what it was expected. With very little passing, the cars came and went as a long, multicolored train. On the twelfth lap, Villagómez passed Alexandre Bardinon (Pinnacle Motorsport) and when he tried to claim his position back, both touched, making the French retire. This made Lorenzo finish 14th. The incident caused a Safety car period and the race ended with it on track. A late penalty to another racer changed the final results, bringing Fluxi up to 13th.

On the second race, Lorenzo started 14th again, and he passed two cars on the first lap. The BlackArts Racing driver put himself in 12th, with Nicola Mariangeli (Motorscape) in front and Alex Connor (Evans GP) behind. On this race, all the drivers were more aggressive, including Fluxi, who on the first laps was in a passionate fight against his rivals. An incident from Amna Al Qubaisi (Abu Dhabi Racing by Prema) prompted the deployment of the Safety Car. Right before that, Alex Connor passed Lorenzo. The race resumed passed its equator. Lorenzo held on to his position on the restart, but soon after managed to put himself in 10th. A new incident, this time between Roy Nissany (Hitech Grand Prix) and Kush Maini (Mumbai Falcons India Racing) caused another Safety Car. During this period, the Majorcan climbed up two positions to put himself in 8th as the preceding two cars retired from the race. As on the first race, a five-second penalty for David Vidales (Abu Dhabi Racing by Prema), allowed Lorenzo to put himself in P7.

16th on the grid for the last race, Fluxi started behind Connor and in front of Alessio Deledda (Pinnacle Motorsport). On a very messy first lap, he lost a position. Soon after an accident by Amna Al Qubaisi made the Safety Car to deploy. The race resumed on its fourth lap and during it he climbed up to 14th. Unfortunately, a crash between Jehan Daruvala (Mumbai Falcons India Racing) and Bardinon stopped the race with a red flag, as both cars were in the middle of the track. After some minutes waiting on the pit lane, the race resumed behind the Safety Car with twelve minutes to go. On the first lap, Lorenzo passed Ayumu Iwasa (Hitech Grand Prix), but on the next one he fell down to P15. The Majorcan was running in a very compact group and on the tenth lap he passed Mariangeli, who he fought up until the end. A fight that the Spaniard brought home, finishing 14th.

Lorenzo Fluxá: “We lived a complicated weekend. Apart from Saturday’s P7, the other races were difficult for us form the beginning. Whether was it for the tyres or the lack of pace to come back, we couldn’t progress. There have been many incidents and that makes it hard to keep the pace. On the restart, you had to be more worried about closing the gate rather than passing. Despite this, you come out strong of these races because you learn a lot, later you perfectly realize how to improve. Now getting points is the way. This week, in Abu Dhabi, I expect to go back to the path we set there. We have to get more in Qualifying because this car, for his setup, is very hard to pass”.