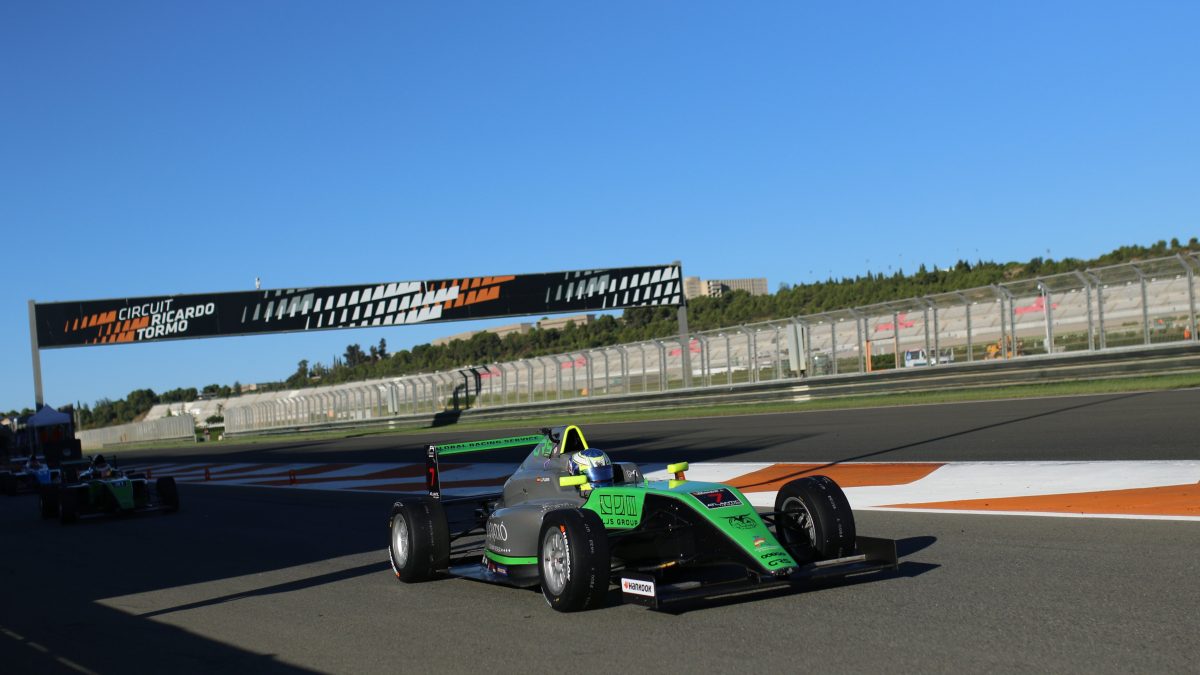 THE NATIONAL CHAMPIONSHIP FACES THIS WEEKEND ITS FIFTH ROUND. THE ARAGONESE TRACK HOSTS THE F4 SPAIN IN A REUNION WHERE THE TATUUS CARS WILL SHARE PADDOCK WITH THE TOURING CARS OF THE FIA WTCR AND THE RENAULT OF THE CLIO CUP SPAIN. LORENZO FLUXÁ, WHO DAYS AGO RACED ON THE ITALIAN F4 AT MONZA, ARRIVES AT ALCAÑIZ PERFECTLY PREPARED, TARGETING A PODIUM AT THE END OF THE SEASON.

The last stretch of the Spanish F4 Championship is underway. The last-minute schedule change for the race at Circuito del Jarama has totally compacted the calendar. This way, there will be three events in three weeks in a row. Motorland, Jarama and Barcelona-Catalunya, which will be the season finale, will be one week a part form each other. Given how the Championship has developed during the first part of the season, this is the moment when Lorenzo Fluxá has targeted to finish on the podium overall.

Today Lorenzo is classified 5th behind Kas Haverkort, Mari Boya, Oliver Goethe and Joshua Dufek, all of them MP Motorsport drivers, a Dutch team that was the revelation during this season on the Championship. The Majorcan is therefore the best classified on his team, Global Racing Service, a Spanish squad who counts with Lorenzo as their spearhead.

The drivers of the Spanish F4 Championship arrive at Motorland with a lot of running. They were already here for testing last year, and right before this race they were testing at Circuit de Barcelona-Catalunya. In the case of Lorenzo, the driver sponsored by LJs Ratxó Eco Luxury Retreat took part again in the Italian F4 Championship Powered by Abarth. As he was before the race at Valencia in a test at Mugello, this time he took part in the three races on the round at the mythical Monza track. All of this with AKM Motorsport Antonelli, a squad collaborating with Kart Republic, with which Lorenzo raced during his times at karting. The young Majorcan had to abandon in one of the races, but on the other two he was almost at the top 10, finishing 12th and 13th respectively.

After racing at Monza on the Italian Championship, Lorenzo travelled to Barcelona to get ready for the penultimate round of the Spanish Championship that will be raced after the event at Motorland. There he rejoined his team, GRS Team, and the Hankook tyres, as the Tatuus F4 T014 equipped with the Abarth 1.4 Turbo engine used in Italy use Pirelli tyres.

5th overall on the Spanish F4 Championship, the target for Lorenzo is to climb up to third at the end of the season. The young 15-year-old debuted on this Championship on the first round at Circuito de Navarra and got his first podium of the year. During the four events leading up to Motorland’s, in Navarra, Paul Ricard, Jerez and Valencia, Lorenzo has showcased great maturity at the wheel, something that has materialised in that he’s finished very race he’s entered. Furthermore, in practically all of them he’s finished inside the points, only finishing pointless in Jerez, when he was taken off the track and had to make a recovery drive, and after the penalty on the second race at Paul Ricard after finishing third.

The races of the F4 Spain at Motorland Aragón are once again under the RFEDA’s (Real Federación Española de Automobilismo) Racing Weekend. It will be a high-end reunion, as alongside this Championship there will be the Clio Cup Spain and the FIA WTCR, one of the highest categories in motorsport full of renowned drivers and teams. All the Spanish competitions of the weekend will be streamed through LaLiga Sports TV.

Lorenzo Fluxá: “Racing at Monza was an experience to remember. It’s a mythical circuit and although I could do a couple of great comebacks, many incidents prevented us from getting a good result. I’m very happy to have raced there. In regard to Motorland, it’s a track that I like because it has a bit of everything. You can pass and the back straight is very long. Plus, every time I come to Alcañiz I feel welcome, as if I was in my own home. In this end of season so compressed we have to get as many points as possible to try and finish 3rd on the Championship. We’re now 5th, but I think that being realistic it’s a target we can reach. I have good sensations and both the team and I will give it all to try and get it”.