Lorenzo Fluxá, on the brink of a podium in a complicated meeting on the Spanish F4 Championship at Jerez

Test in Mugello and races at Valencia; full week for Lorenzo Fluxá with the Tatuus F4 Abarth 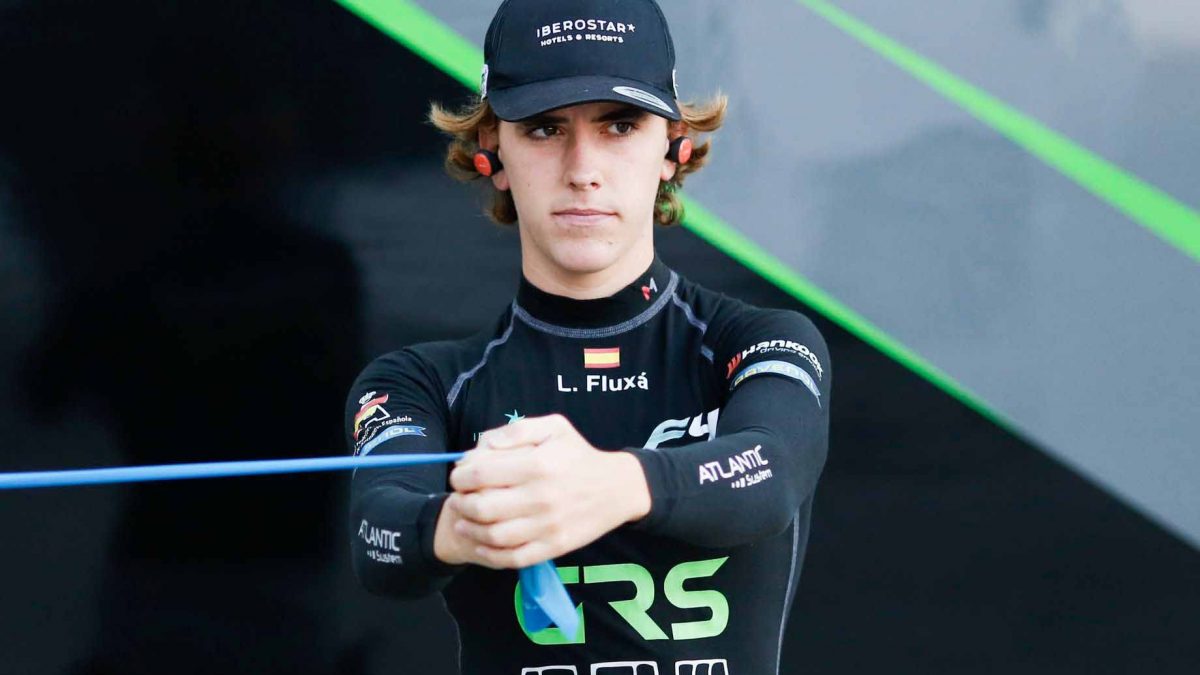 THE MAJORCAN DRIVER ACHIEVED TWO 5TH POSITIONS AND A 12TH ON THE THREE RACES AT THE ANDALUSIAN TRACK OF JEREZ. THE THIRD ROUND OF THE SPANISH F4 CHAMPIONSHIP VISITED THE TRACK AND LORENZO ASPIRED TO 4TH ON THE STANDINGS DUE TO HIS CONSISTENCY. SADLY, A TOUCH WITH ANOTHER PARTICIPANT WHEN HE WAS RACING 4TH DENIED HIM.

Rain was the principal attraction to the first outings of the weekend of the Spanish F4 Championship on the Jerez Circuit-Ángel Nieto. The wet tarmac on the 2 Free Practise sessions conditioned the performance of many drivers of the grid, since they drove on wet tyres but they used the dry compound for the races. To add more difficulty to it, the first Qualifying was done while the track was drying. In this scenario Lorenzo Fluxá, the young Majorcan driver from the Global Racing Service team, set a time that put him 9th on the grid for the first two races of the week. This circumstance made Lorenzo to use an intelligent tactic to gain as many positions as possible in those races. And he did, as he managed to rise up to 5th and 6th – although an exclusion during the second race put him in 5th. On the last race, from a promising 4th on the grid, Fluxá aspired to the top. Unfortunately, on the first lap a hit form a driver who was riding on the back denied him by sending him off the track, making him to make a recovery drive from last to 12th.

Lorenzo started 9th on the first race of the weekend. After some struggles at the start, the Majorcan managed to put himself in 7th after passing Ignacio Montenegro (MP Motorsport) and Enrique Boardás (Fórmula de Campeones). On that moment, Lorenzo had 6th positioned Joshua Dufek (MP Motorsport) on his sights. The deployment of the Safety Car neutralized racing for two laps. On the restart, Lorenzo put himself in 6th seizing Kas Havenkoort’s (MP Motorsport) puncture. On lap 7, the Majorcan attacked Enzo Joullie (MP Motorsport), fifth at the time, passing him on the 9th lap, when there were 7 minutes left on the race. At that moment Lorenzo was one second off 4th placed Russian Ivan Nosov (Drivex School), whom he pushed until the last stretch of the race, reaching the finish line almost side by side. A very well managed race, very intelligently climbing up until the brink of a podium position.

Global Racing Service’s number 7 car, Lorenzo’s, started from 9th on the second race as well, this time on Sunday. From the beginning of the race he had a fight with Joullie, his predecessor, and Nosov, who was on his back. It was on the third lap when Lorenzo passed the French to put himself in 8th. Right then he put his sights on 7th position, although Dufek had a 2-seconds gap on him. An incident between Mari Boya and Kas Havenkoort, who were in front, saw Lorenzo climbing up to 6th, catching up to Dufek on the dying stages of the race. The Tatuus Abarth on the LJs Ratxó Eco Luxury Retreat colors crossed the finish line in 6th, but after the race the exclusion of a driver who finished third awarded the Majorcan a 5th position.

Fourth on the grid for the third and last race of the weekend at Jerez, the car of Fluxá suffered a ram from another driver on the first lap, on turn 6, that put him in last position. The young 15-year-old started a comeback then to try and get some points to climb up the standings. With his Tatuus damaged, in barely two laps he passed two drivers, putting himself in 17th. Later on, he passed Paul Pallot (Drivex School) and Javier Sagrera (MOL Racing), with which he put himself in 13th. One last pass, this time to Carles Martínez (Fórmula de Campeones), put him in 12th.

Lorenzo Fluxá: “Complicated weekend that promised much, but it didn’t come out as we expected regarding what we improved on track compared to our rivals. We have done everything we could and when everything was on our side, on the third race, luck was not. Another driver rammed us and prevented us from fighting for a podium, and I’d even say, that for what I’d have wanted to be my first victory. Both the first races were conditioned by the first Qualifying. On the session, the track improved on every lap, it was crazy and with two ninth best times we knew we couldn’t opt to win but to recover up until we could. For this reason, 5th and 6th were not bad at all. I hope these setbacks we are having are gone on the next races”.